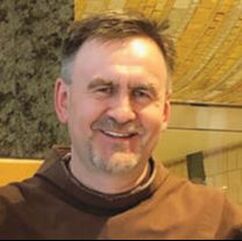 Fr. Jacek Orzechowski, O.F.M.
Pastor
Fr. Jacek was born in Poland in 1969. He and his family immigrated to the United States in 1988 after spending a year in Italy as refugees. At the age of 26, Jacek joined the Franciscan friars of Holy Name Province and received a Master of Divinity degree from the Washington Theological Union. During his time in formation, he spent one summer in Mexico and another in Peru, immersing himself in the Latino language and culture. Fr. Jacek speaks about it as one of the most transformative experiences of his life. From 2000 to 2001, Br. Jacek was assigned to do his ministerial internship year at Immaculate Conception Catholic Church in Durham. At that time, Fr. David McBriar, OFM was the pastor, and the Latino community was beginning to grow exponentially.
After being ordained a priest, Fr. Jacek was reassigned to IC where he served from 2002 to 2008. Subsequently, he was asked to serve as a parochial vicar at St. Camillus Church in Silver Spring, MD, the largest and most diverse parish of the Archdiocese of Washington. After nine years, he accepted a position at Catholic Charities of the ADW, where he coordinated Parish Community Organizing and Advocacy efforts. He served in that position until mid-August 2020 when the Provincial Administration asked him to serve as pastor of Immaculate Conception Catholic Church in Durham.
Throughout his eighteen years of public ministry as a friar, Fr. Jacek has worked tirelessly preaching the Gospel, sharing Catholic Social Teachings, and collaborating with lay people on local and global advocacy issues, especially immigrant and climate justice.
Three years ago, the Minister General of the Franciscan Order appointed Fr. Jacek to serve as a member of the Justice, Peace and the Integrity of Creation Animation Committee, and assist the Office in Rome in its effort to engage the Franciscan family worldwide in the care for our common home through Pope Francis’ groundbreaking encyclical: Laudato Si’.
Jacek is an avid hiker. He is also thrilled to be back in Durham and work with this diverse parish community to live out the Gospel and respond to the signs of the times – collaboratively, creatively, and courageously.
Contact: 919-682-3449, ext. 259 / email