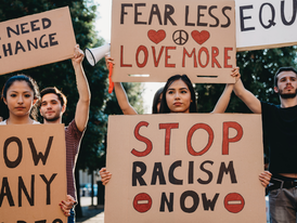 ​In solidarity with the community of Buffalo, NY, Immaculate Conception Church mourns the 10 lives lost last Saturday. We also stand with all communities that have suffered from racist hate crimes and gun violence in denouncing the beliefs and policies that have led to these events.

Saturday’s attack was not an isolated event. Rather, it is yet another example of how racism continues to
thrive–terrorizing and traumatizing people of good will, especially our brothers and sisters of color.

​Saturday’s attack also was not the result of mental illness. Rather, it was the result of an intentionally cultivated mindset that upholds white supremacy. Earlier this year, the IC Promoting Human Dignity team sponsored a trip to Stagville, a plantation on the border of Durham. On our guided tour, we heard a piece of Durham’s history with slavery and how Black people continued to be disenfranchised even after its end. Slavery thrived because of a white supremacist mindset that some people were superior to others and that for the sake of wealth and status, it was acceptable to brutalize and exploit the “other.”

While the shooting in Buffalo and others like it are blatant examples of the violence of racism and white supremacy, these ideologies more subtly kill human life and its dignity on a daily basis, including:
As Catholics called to uphold the dignity of the human person, we cannot tolerate racist ideologies and the systems that perpetuate them. Our solidarity in mourning must become solidarity in action. We are blessed to live in an active parish community that provides many options for individuals and families to do the work of dismantling racism in all its forms. Here are some key ways you can take action:
Each Easter season, we celebrate the resurrection of Christ and the invitation to new life that it brings. Our readings from the Acts of the Apostles paint a picture of communities animated by the risen Christ banding together to speak the truth and care for those on the margins. In a few weeks, we will close out this season with the feast of Pentecost – the outpouring of the Holy Spirit that emboldened the disciples to do the work of building God’s kingdom. Spurred by the reminders of this liturgical season, let us go forth doing the work of dismantling racism and white supremacy to build a kingdom where all are welcome and justice reigns.

*This statement has been prepared by the Justice, Peace, and Integrity of Creation (JPIC) Ministries’ “Promoting Human Dignity” (PHD) team of Immaculate Conception Parish, Durham, NC