Following Up & Doing the Work

As a follow-up to our parish-wide August 20th panel discussion “On race, our Catholic faith, and our Durham Community”, Immaculate Conception is offering another opportunity for learning, reflection, and action through a fall course on racial equity.  The Promoting Human Dignity Team is glad to announce a fall course on racial equity, through Just Faith ministries.  Faith & Racial Equity: Exploring Power & Privilege is an 8-session program that awakens groups to the economic systems, public policies, cultural norms, and hidden biases that empower some and oppress others.
​
We are going to begin with the first module, "Racial Equity: Exploring Power and Privilege" The first half of the program lays the groundwork for understanding and identifying racial privilege.  The second half takes a deeper dive into specific issues related to power and privilege, including affirmative action, the school-to-prison pipeline, disparities within the criminal justice system, and biases in media representation.   As with all JustFaith Ministries’ programs, participants will explore how their faith should inform their response to their learning, as well as discern action steps for working toward racial equity in their own communities.
Register Here Today!
​

"If you are neutral in times of injustice, you have chosen the side of the oppressor."
- Archbishop Desmond Tutu
After watching and reflecting on the protests around the United States that followed the May 25 death in Minneapolis, Minnesota, of George Floyd, Provincial Minister Kevin Mullen, OFM, writes about the situation and on the cause of the killing by the police officer: racism. In the message below he describes three perspectives for responding to a crisis.  Attached to his letter is an extremely important article by Fr. Bryan N. Massingale, published in the National Catholic Reporter on June 1, 2020 entitled, The assumptions of white privilege and what we can do about it.

The members of our Youth Council have prepared this statement on racism. Please listen to the voice of our youth.

From our CGS catechists: As parents and caregivers, we naturally feel the need to protect our children. But that doesn't mean we should avoid difficult topics like racism, inequality, and violence. In fact, avoiding these issues may communicate indifference, when as Christians we are called to work for justice, the common good, and peace in our world. With older children we can talk about and demonstrate our commitment to love one another as Christ has loved us, and with younger children we can model our language and environment after the all-encompassing love of God, the Father of all.

​For more from CGS click here
Teach Your Children Well
"These volatile, extraordinary times we live in are infuriating, concerning, and worrisome, but for our children they must be completely bewildering. Explanations and context can be difficult.

"We know from Harvard research that children as young as five when exposed to racism tend to accept the prejudices they are exposed to while not understanding their meaning. The same reports recommend explaining race and racism as early and as often as possible to offset any biases.

"Children’s books dealing with these issues are one of the best teaching tools. Below is a selection of some of our favorites. NOTE: these and so many other titles on this topic are in high demand, so may take a little longer than normal to get, but still worth the wait (also, isn't it a good thing that so many people are wanting to read them?).   - Regulator News, June 4, 2020​ 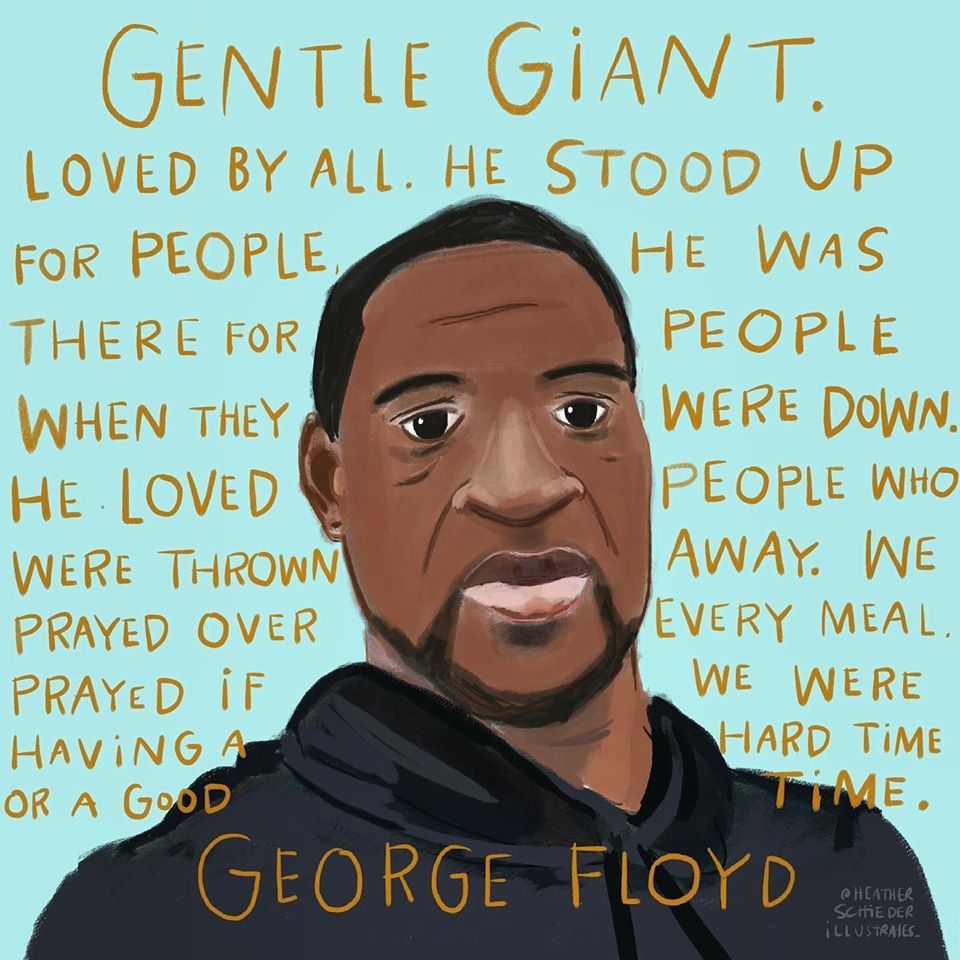 Heather Schieder illustrates
​The following are a sample of of other recent public statements from Catholic and other faith organizations following the death of George Floyd at the hands of Minneapolis Police.

Public Statement from Catholic Charities of the Twin Cities
REMEMBER GEORGE FLOYD: WE STAND TOGETHER AS ONE HUMAN FAMILY   May 29, 2020
It is hard to find the words to describe the pain, grief and anger our community is experiencing right now, but silence is not an option. The death of George Floyd at the hands of Minneapolis Police Officers was unjust. It goes against the principles of Catholic Social Teaching that guide us at Catholic Charities and my own deeply held values. This tragedy tears at the fibers that bring us together and shines a harsh light on the systemic injustices that too many must confront every single day of their lives.
We are one human family – what affects one of us, affects all of us.
George Floyd was killed not far from several Catholic Charities locations serving children and adults, where staff work hard to build a culture of safety and community for individuals who have experienced unthinkable trauma in their lives. They are reeling, and our staff are at a loss to provide comfort.
Hundreds of Catholic Charities staff who work on our shelter and emergency services teams share something in common with George Floyd; he worked at Harbor Lights shelter in Minneapolis, committed to our most vulnerable neighbors and working to create hope and opportunity.
At a time when words seem to fail, I turn to the wisdom of Rev. Dr. Martin Luther King Jr.:
“People often hate each other because they fear each other; they fear each other because they don’t know each other; they don’t know each other because they cannot communicate; they cannot communicate because they are separated.”
We cannot be numb. We cannot separate ourselves from the injustices in our community. And we must not stop communicating, even if it’s hard to find the words.
The mission of Catholic Charities is to serve those most in need and to advocate for justice in the community. We stand with all those who are working to confront the systemic racism and prejudice that created the conditions that allowed George Floyd to die so tragically.
As I write, our community is shaking with emotion and violence. We don’t know what today or the weekend will bring. We are concerned about the safety and wellbeing of our clients, staff, all of you, and our entire community. We must pursue peace. We know it is only possible if we also pursue justice.
Our prayers are with the family and friends of George Floyd, all of you and our entire community as we move forward, together.

Public Statement from JustFaith Ministries
At JustFaith Ministries, our hearts are with the the families of George Floyd, Breonna Taylor, and Ahmaud Arbery. We are heartbroken by these killings and outraged by the white supremacy that continues to take the lives of our African American siblings.
As people of faith, we call on Christians across the country — especially White Christians — to raise our voices against racial injustice and white supremacy. As these killings continue at an alarming rate, we call on people of faith to educate our communities about the deadly consequences of fear and racial bias, and to study our country’s history of racism, which repeats itself time and time again. We also urge our JustFaith community to demand systemic change and accountability within our police departments, criminal justice system, and all institutions, especially those of which we’re a part.
In the words of Saint Oscar Romero, we say to our fellow Christian brothers and sisters, "People of God, live up to your name!" ​

Public Statement on Systemic Racism North Carolina Council of Churches · June 2, 2020
A resolution adopted by the Governing Board of the North Carolina Council of Churches, June 2, 2020.
Whereas the North Carolina Council of Churches was founded in 1935, primarily for the purpose of addressing racial inequity and racial injustice, and
Whereas our white founders soon recognized that racial equity and racial justice should not be discussed without including racially/ethnically diverse voices and so included black faith leaders from North Carolina as members of the Council by 1943, and
Whereas we have striven together in these eight decades to support the Civil Rights Act, support the Voting Rights Act, lament the deaths of untold black neighbors whose names are written on the heart of God and on the hearts of those who loved them, call for justice when the systems of justice failed us, and hold firm to the belief that our diversity makes us stronger, and
Whereas the murder of George Floyd by a white police officer while three other white officers watched has exacerbated an already unacceptable devaluing of black and brown lives, and
Whereas racism has been compared to a complex underground rhizome that spreads unseen before erupting into specific social structures (e.g., law enforcement), concentrating attention on this part of the structure while the main tumor continues to strengthen racism in the remainder of the system, and
Whereas we recognize and confess that the racist systems in which we live primarily benefit white people, we therefore place a higher expectation on white people to do the necessary work of dismantling these systems;
The Governing Board of the North Carolina Council of Churches hereby resolves to press ahead with urgency to understand the dynamics of racism in all of its manifestations and to be transformative in society by working across systems and structures where interpersonal, systemic and institutional racism operate, and to work to dismantle the racist systems that perpetuate and allow violence against black and brown bodies.
We will immediately and actively:
​Public Statement from The Southern Coalition for Social Justice
​     Time and time again, we have been forced to watch our brothers and sisters being murdered in cold blood. Last week’s horrific murder of George Floyd instinctively and collectively raised feelings of anger, grief, shock, and outrage, as we heard the familiar words – “I can’t breathe” – of a dying man pinned down helplessly and inhumanely by a police officer. The brutal murder of a Black man, woman, or child at the hands of a white police officer is nothing new. We’ve witnessed it over and over again, with names like Breonna Taylor, Ahmaud Arbery, Eric Garner, and countless other unpublicized African Americans who fell victim to the systemic racism and oppression that permeates this country.
We stand with you, our brothers and sisters, in the fight against these devastating racial crimes of hate and disregard for dignity and human rights. We hurt with you. We weep with you. And we fight alongside you as you demand justice for these senseless tragedies.
Our communities continue to fight, hope, pray, march, scream, protest, and die for change. But, ultimately, that change will only come about when the cost of benefiting from a system of oppression that has plagued this nation becomes too high for those in power. Now is the time to hold those who have benefited (and continue to benefit) from the current structure accountable. Now is the time to take the fight to the ballot box and remove from power those who continue to perpetuate the cycle of racism, hate, and injustice.
The Southern Coalition for Social Justice stands in solidarity with our Black leaders and communities. We stand with you in the fight to end police violence and hold perpetrators accountable for their actions. We demand justice, and we’ll be here with you, and for you, as we work toward achieving it.

​​"Ask when you don’t know — but do the work first. This is nuanced. Some marginalized/disenfranchised folks will tell you not to ask them anything; don’t be offended by that. Folks are tired, and that is understandable because it is exhausting to be a marginalized person in this world. However, there is something special that happens within human connections and relationships. In a nutshell, don’t expect for people to educate you. Do the work to educate yourself. Ask questions within relationships that feel safe, and do so respectfully."
- Courtney Ariel​ 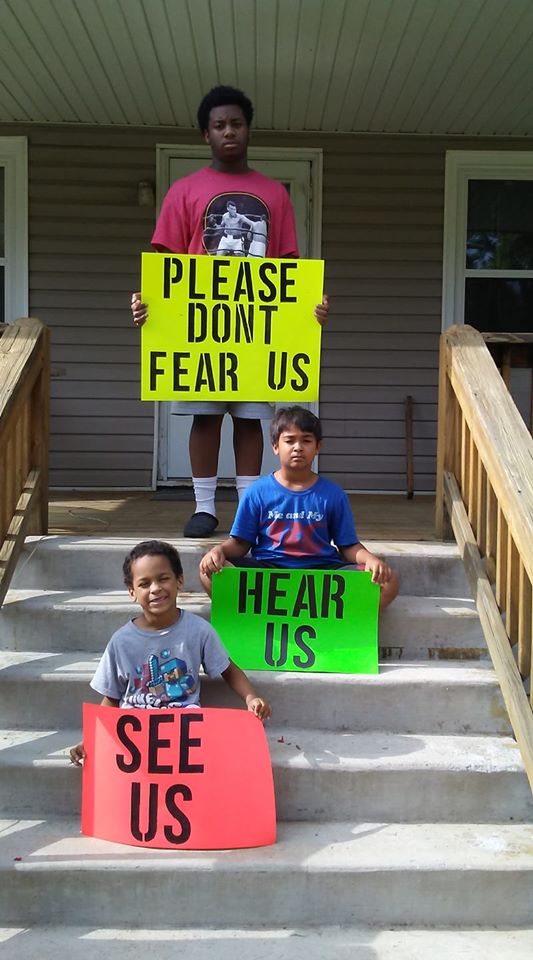 ​Articles on Racism
Videos and Films
​​Click here for an Anti-Racism reading list
​"The beauty of anti-racism is that you don’t have to pretend to be free of racism to be anti-racist. Anti-racism is the commitment to fight racism wherever you find it, including in yourself. And it’s the only way forward."
- Ijeoma Oluo